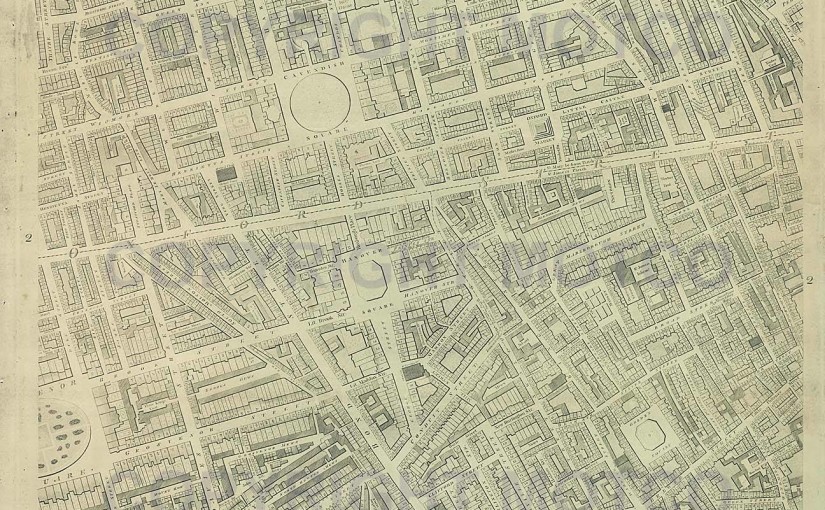 By the late eighteenth century both London and the map trade were in the midst of a spectacular growth. The city itself was expanding, particularly westwards and northwards, with new estates being built every year. During a period that featured war with the American colonies as well the French Revolution, these new estates came replete with such nationalistic names as ‘Patriot Square’ and a panoply of streets named after kings, regents, queens and princes. These carefully planned estates may have beautified the capital, but they didn’t do much to save the colonies.

Both land surveyors as well developers and gentlemen owners were in desperate need of a new, accurate and, above all, detailed plan of the city and its environs. The last good plan of London had been John Roque’s Plan of 1740, and this was now utterly outmoded.

Richard Horwood, of whom very little is known and who published only one other map of note (a six-sheet plan of Liverpool), determined to provide the surveyors and gentleman owners with such a plan. He probably intended to make his fortune from the endeavour, although regrettably this did not eventuate.

We know Horwood was planning his map by the very late 1780s, and by the early 1790s had garnered enough subscriptions to begin the survey. By the mid-1790s he had at least £4,000 in ready cash from his subscriptions, but this was still not enough to pay for the surveying and production of the plan, and Horwood eventually managed to secure a loan from the Phoenix Fire Office in Lombard Street in return for dedicating the map to the company. The Phoenix Fire Company also spent the grand total of £20 on promotion (a not inconsiderable sum at that time)

The actual foot-slogging surveying was a tedious nightmare. Horwood and his surveyors were sometimes refused entry to back alleys and private estates, and occasionally to more noteworthy areas. Horwood’s frustration at not being allowed to provide any detail of the interior of the Tower of London (then a closed military site during a period of war and revolution, equatable to military bases today) is clearly evident on the plan.

Horwood’s Plan was a landmark for its day. Horwood intended the plan to show every house, every street, lane and alleyway, every feature, and many gardens in order to serve the needs of the gentlemen landowners, surveyors and public officials of the day. It was to be the first map since 1676 to show every individual property, and it remained the largest scale map of London for decades to come. It took Horwood and his team of surveyors over a decade to complete. Today it stands as one of the most magnificent examples of eighteenth-century cartography, and it is with great pride that we are able to bring it to you. For the historian or genealogist, Horwood’s Plan provides unprecedented access to late Georgian London.

Horwood eventually wanted to incorporate views and scenes in the margins of the map. He never managed it … but we hope to complete the task for him. By the end of 2006 the Horwood map at Old London Maps, and the accompanying Cary map for London’s satellite villages, will be fully interactive, providing contemporary commentary and views, using thousands of engraved images of London and its environs of the time. Please bookmark this site and visit often … Georgian and Regency London of the eighteenth and nineteenth centuries will shortly be revealed in its stunning entirety.